No Deposit Casino of the month

No Download / No install APPs
Compatable with all mobile Phones
CasinoDepositMobile.com

RTGBonus.eu are pleased to bring you the exciting opportunity to develop your online casino gaming skills while having fun at the same time. We offer a variety of 1500+ free game simulations so you can play all your favorite online casino games for fun, while practicing and improving your gaming skills. You can place bets for fun gambling without money or credit cards. 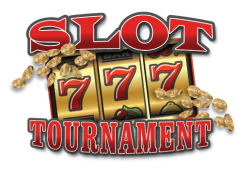 Don't want to spend a cent? Then Free Slots Tournaments are for you! You don't have to pay an entry fee to take part, but can still win your share of great prizes!
Nothing beats the thrill of competing against other online players for the big prize pot. All you have to do is spin the reels as many times as you need to reach the highest combination of winning paylines.
Free Online Slots Tournaments let you play without spending any money! It's the perfect exercise ground for those who want to experience Online Slots Tournaments for the first time. It requires no entry fee, yet promises prizes – what could be better?

50$ free bonus chip for new casino players or depositors who have their birthday on November at the following casinos :

You rarely see diamond-encrusted bracelets or pyramids of cash being awarded to Five-Card Stud players nowadays. The spoils, the fame and the fortune all go to the Texas Hold'em pros so Bodog's decided to take Caribbean Poker up a notch and level the game playing field. This variation on the classic Texas Hold'em game is all about small stakes and big wins, especially when you consider the hefty progressive jackpot to be won. Learn how to play Caribbean Hold'em Poker and walk away with a nice bundle of cash should you play your cards right.

Choose your wager amount ranging from $1 (minimum), $5, $25, $100 and $500 (maximum) then press Deal. Both the player and dealer are given pocket cards. Two cards face up for the player; two cards face down for the dealer. Three community cards are then placed in the middle of the table for the dealer and player to share, called the flop. After the flop, players can decide whether they want to Raise their original wager to keep the game going or Fold, to end the game. If a player raises and the dealer's hand qualifies (with a pair of fours or better) the one who can make the better five-card hand wins. Yep - just like Texas Hold'em.

Hands are ranked according to standard poker rules. 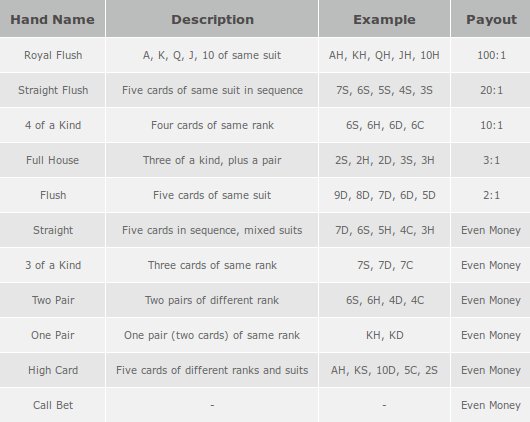 Just like Caribbean Stud Poker there is a lucrative progressive jackpot to be won if a player wagers an extra a dollar on the red circle before pressing the Deal button at the beginning of the game. If the player doesn't bet an extra dollar, they won't be eligible for the progressive.

Only five hands qualify for the progressive jackpot: 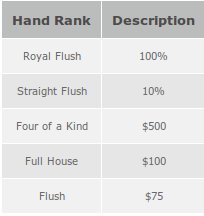 Subscribe to Our Newsletter to get Important Casino News, Amazing Bonus Offers, No deposit bonus, free spins and notification about any other casino promotion :