Explore Your Wild Side at Slots.lv Casino at Golden Gorilla Slot 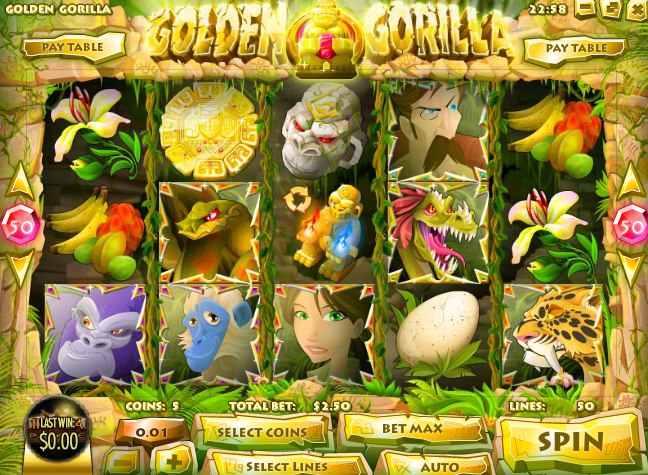 As we all know already, Slots.lv Casino has some of best online games around – there’s a little something for everyone. For those of us who’re especially tuned to their “wild side” it’s time to unleash all that animal magnetism with Golden Gorilla Slot and Blazing Buffalo Slot.

Be the next king of the jungle and dethrone the Golden Gorilla for your share of all the prizes and big wins the jungle has to offer. The visuals are fantastic: with stellar graphics and vivid icons ranging from Bananas to Prehistoric Creatures, there’s a real adventure just waiting to be embarked upon.

Now, if you’ve managed to line up some wilds or free spins, you should know that this game is all about the Expanding Wilds Feature. Whenever possible, the wild symbol expands to fill the entire reel to form a winning combination. If you manage to make it to the Golden Gorilla Slot Bonus Round, you should also know that the wild symbol has a 3X multiplier during the bonus round. Now that’s some chest-pounding action right there, but, don’t forget, there can only be one king of the jungle.

Now if you’re looking for something a little less “wild” and more, picturesque or pastoral, look no further than Blazing Buffalo. This immersive slot takes you to the wide plains and grasslands and has qualities that will please anyone. The ultimate goal, and if you’re lucky enough, is to score three American Bison icons on the reels, which will take you straight to one of this game’s most stellar features: the Three Card Monte Bonus Round. Tempt chance as you try to locate the buffalo card and be rewarded.

There’s also a lot to be said about the Free Spins Round, given the multiplier goes up to 3X. This boosts the winning potential all the more. Visually, it’s dynamite: when the Blazin’ Stampede Free Spins Round is activated, the entire first reel will actually go up in flames and will become wild for the duration of the round.

All in all, Golden Gorilla Slot and Blazing Buffalo are a creative and dramatic interpretation of the essential elements of slot machine gaming. So whether you’re the king of the jungle or a maverick of the grassy plains where the buffalo roam, there’s a little something for all your needs at Slots.lv Casino.