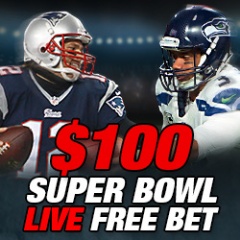 29 January 2015, London, UK (Press Release) — With just days to go until Super Bowl XLIX, the matchup between the Seattle Seahawks and the New England Patriots is almost too close to call. However as Sunday’s showpiece draws closer, Intertops Sportsbook is seeing plenty of action on many of its varied prop markets.

The Patriots are currently a one-point favorite going into the biggest single sporting event of 2015, and bettors are backing tight end Rob Gronkowski to add to his two postseason touchdowns so far. ‘Gronk’ is -143 to score a touchdown at any time in the Super Bowl and +650 to score the first.

Seattle’s main threat will likely come from Marshawn Lynch, the -167 favorite with Intertops Sportsbook in the ‘Anytime Touchdown’ market and +550 to get into the end zone first. The man known as ‘Beast Mode’ recorded an NFL-leading 17 regular season touchdowns compared to Gronkowski’s 12, and the Seahawks running back is -125 to score a touchdown before Gronkowski in Sunday’s game.

“As is often the case with a game between two evenly-matched sides, we have seen a lot of interest in our prop markets, especially the touchdown scorer markets,” Intertops’ Sportsbook Manager said.

“With nearly 100 different markets for pre-match betting, and many more live betting options, we’re sure our members will be able to find what they are looking for ahead of this year’s Super Bowl.”

Intertops Sportsbook is offering a free matched bet of up to $100 for customers who take advantage of its live betting markets during the Super Bowl. The sum of the first live bet placed can be claimed regardless of whether it wins or loses. Members can also win themselves a trip to next year’s Super Bowl 50 just by wagering on Sunday’s game! Terms and conditions for all promotions can be found at www.intertops.eu.

Since being founded in 1983, Intertops Sportsbook has remained popular and trusted by sports fans from all over the world. It took the first ever online sports bet in 1996, and offers pre-match and live odds on thousands of sporting events all year round including NFL, NBA, European soccer and all four tennis majors.

About Intertops (www.intertops.eu)
Intertops was founded in 1983 in London with a UK Bookmakers License and relocated to Austria in 1992. It accepted the world’s first online bet in 1996. In 1997, the online business moved to Antigua while the traditional sports betting business remained in Austria. 1998 saw the launch of one of the first Microgaming online casinos. In 2001, the innovative company developed the first mobile betting application, enabling customers to bet with mobile phones anywhere anytime. By 2003 Intertops began online poker operations, progressing to online skill-based gaming in under a year. Intertops Casino now provides more than 300 state-of-the-art casino games from Real Time Gaming (RTG). It has some of the biggest progressive jackpots available anywhere online including several that are currently well over $1,000,000.

100 Free Spins for Jackpot Paradise Players on Stash of the...

Get up to 25 free spins on four superb Vegas titles!