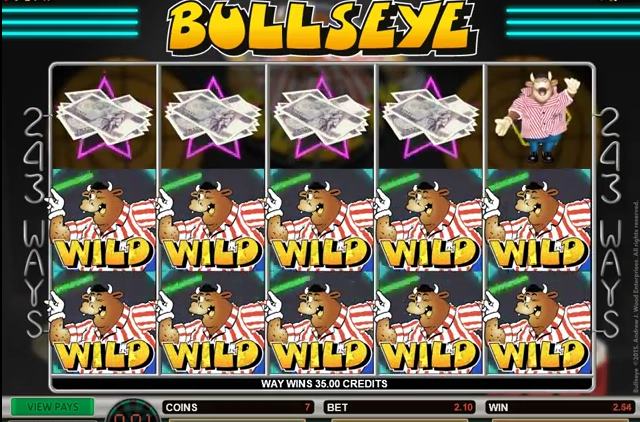 Microgaming is delivering a ‘super, smashing, great’ online slot to its operators this month.

The classic TV game show ‘Bullseye’, was presented by stand-up comedian Jim Bowen and was a huge hit. Based on the game of darts, Bullseye involved three pairs of contestants competing against one another to win prizes. Bully, the darts playing bull was the show’s mascot, making appearances throughout the program.

The popular game show is presented in this 5×3 reel, 243 ways to win online slot, with reels based on the program’s notorious star prizes, including a speedboat, caravan and car.

It’s game on during Bully’s special bonus round, triggered by the prize board symbol on reels one and five. The bonus round lets the player step up to the oche for some real darts action. Players throw darts at the board for the chance to win cash prizes depicted by such vintage items as a VCR or carriage clock, worth up to 15x the total bet for each dart thrown.

Furthermore, three or more scatter symbols on the reels takes players to the retriggerable free spins bonus. 15 free spins are presented, during which all wins are doubled, and additional scatter pays between 5x and a ton (100x) can be awarded.

With suitably retro graphics and apt sound effects, including the voices of Jim Bowen and co-host Tony Green, Bullseye online slot brings a sense of nostalgia to gameplay.

Mike Hebden, Head of Casino Games at Microgaming, commented: “This game revisits one of the most-loved television shows of the era. The online slot embraces all the show features that made the program so popular, including the classic one-liners, prize board, and Bully’s star prizes. We expect the game to excite fans new and old, and with darts season on the horizon, it is the perfect time to unleash our Bullseye slot.”