Travel Through Space with Cosmic Quest I & II at Slots.lv

Ready to conquerthe known universe with your trusty space-monkey sidekick? You’ve found the right game because Cosmic Quest is all about sifting through the cosmos for big wins and stellar features. We’ve taken this interactive i-Slot for a ride around the galaxy and can safely say that we’re impressed. Both the original and sequel offer great features, big payouts and entertaining visuals that’ll keep you entertained for hours on end.

From the opening video to the overall futuristic theme, the game’s effects and animations are simple, but engaging. With symbols ranging from a Space Dog, Satellites and Space Rockets to an Observatory, Space Food and an Astronaut, the slot game has done a great job at making sure that the graphics are as cohesive as they are entertaining. In addition to free spins, which are great for boosting your overall chances of scoring, the Asteroid Blasteroid Bonus Round might just be the best feature. This round is triggered when three or more Pink Astronaut symbols line up. What we love most about this immersive, skill-based bonus round is the simple fact that it contains five stages; this means X5 the coins you could be earning for blasting asteroids into smithereens. 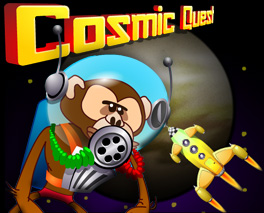 As for the sequel, Cosmic Quest II: Mystery Planet, you can expect the same streamlined theme and graphics, but with added features. For starters, there’s an expanding wild, which means that you will have higher chances of landing a nice fat payout. The Yellow Rocket Ship symbol is wild and expands to fill the reels whenever possible to form winning combinations. What’s more, there’s a fun little effect built in: whenever the wilds are lined up, the rockets will actually blast off, and it’s all thanks to the stellar graphics. Episode 2’s bonus round, while not as intricate as that of its predecessor, is a great and thoroughly entertaining way to rake in some bonus coins. The round is skill based, which means you will have to make sure you keep your wits about you and successfully navigate your spacecraft through a cave. 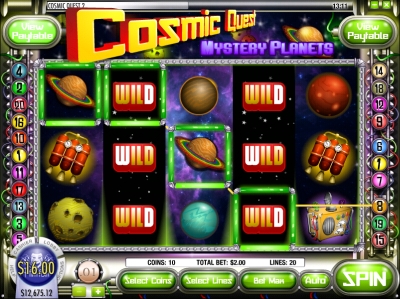 Budding astronauts and players who are interested in thrilling graphics and a well-crafted theme should definitely take Cosmic Quest episode 1 and 2 for a ride through the vast and mysterious universe.

With great bonus features, free wins and regular payouts, Cosmic Quest is everything you needs to embark on an imaginative and lucrative journey through space and time.

RTGBonus.eu Exclusive 10 free no deposit bonus at Slots.LV this week