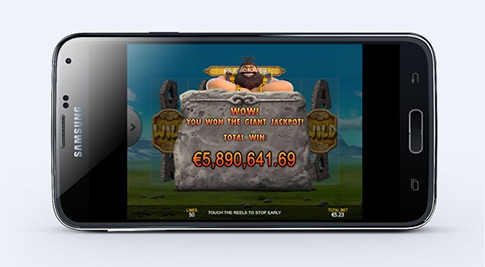 Playtech has set the record for the UK’s largest mobile slot jackpot win after a player on Galabingo.com spent just £4 to spin her way to a massive €5.89m (USD 6.3M).

The win is the largest ever on a Playtech network bingo site and the second biggest ever Playtech slot win on a progressive jackpot game following Playtech progressive Beach Life which saw the jackpot drop at £6.2m in 2012.

The lucky librarian from Glasgow in Scotland – who has chosen to remain anonymous – was blown away at the news but went to back to stamping literary works of fact and fiction the next day, seemingly unaffected by her life-changing jackpot win.

She has been a loyal Gala Bingo customer for three years online and in club and incredibly wagered just one £4 spin on her Android Galaxy S5 on Playtech omni-channel slot Jackpot Giant – an unbelievable 1 million, one hundred twenty-six thousand, three hundred seventeen times stake win.

“I picked up my mobile and started playing while I was watching TV,” the winner said. “Minutes later I saw a huge string of numbers coming up and realized I’d hit the jackpot. I was simply blown away and couldn’t believe I’d won. It’s still sinking in and my family and I are still in a complete state of shock.”

Shimon Akad, COO, said: “To claim the UK mobile slot jackpot record is fantastic and proves we lead the industry when it comes to progressive jackpot games. I’d like to also congratulate Gala Bingo and their winning player.This is yet another great reason to be part of Playtech, the gaming industry’s leading and most dynamic omni-channel company.”

Alison Digges, Brand Director, Gala Coral Interactive, said: “This is our biggest ever jackpot win on Gala Bingo by far and we’re delighted one of our many loyal players has claimed the prize. Jackpot Giant is one of our most popular progressive games and we can’t wait for yet more winners.”

Win fantastic prizes and luxury breaks away with bet365bingo!