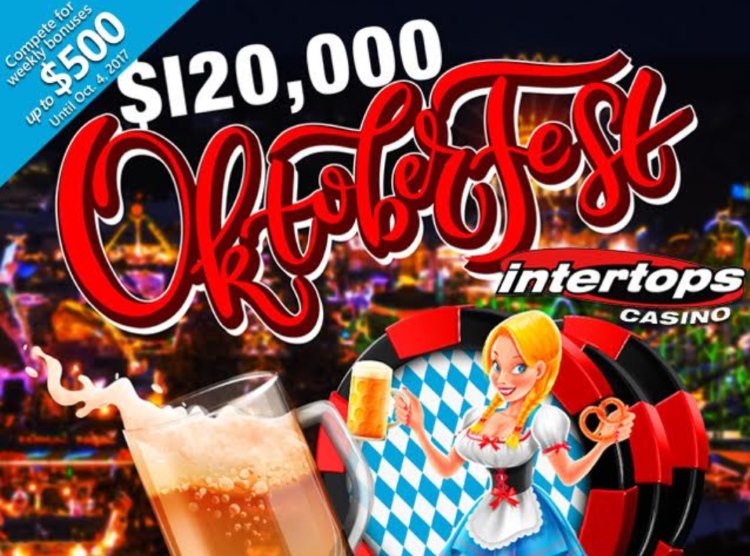 Oom pa pa and ya ya ya – it may only be September but in Germany it’s time for Oktoberfest.

Intertops Casino  is celebrating Munich’s famous festival of beer with its $120,000 Oktoberfest casino bonus event.  While Germans raise their steins, Intertops Casino players will be competing against each other for top bonuses. Every week, 300 players will win up to $500 each.

“You don’t need a dirndl or lederhosen to enjoy the party,” said Intertops’ casino manager. “We’re bringing the fun of Germany’s annual beerfest to YOU!”

Oktoberfest was first held in 1810 to celebrate Bavarian Crown Prince Ludwig’s marriage. That year festivities were in October, but when the event was repeated in following years it eventually began starting in September when the evenings are warmer.

So from now until October 2nd, Intertops Casino will award $30,000 in casino bonuses to frequent players every week.  Intertops Casino players automatically earn frequent player points when they play any of the casino’s hundreds of games from Realtime Gaming. They can earn points by playing download or instant play games on their desktop or laptop computer, or by playing in the mobile casino on their smartphone or tablet.

Players are ranked on a Scoreboard according to their points. Moving up one or two positions can mean winning hundreds more, so competition between players can be very intense.

There will also be weekly random draws for another $5000 that even occasional players can win.

All players that make it to the top twenty any week of the promotion will be entered in a final draw for a $1000 cash prize with no wagering requirements.

Intertops Casino, one of the world’s oldest and most trusted online casinos, offers one of the best selections of slots and table games available.  Later this month they’ll launch Dragon Orb slot , a magical new Oriental-themed slot game with a sticky expanding wild.