Want to play for serious cash but don’t have the time or poker prowess to grind it out for hours? Bovada Poker have got you covered. Jackpot Sit & Go is a three-player Texas Hold’em poker tournament format that’s perfect for the casual poker player looking for a big boost to their bankroll, with a minimal buy-in, in a short period of time.

Jackpot Sit & Go at Bovada Poker is a fast and easy three-player poker game where each player starts with the same size chip stack (500) and the prize pool is randomly determined by a spinning reel at the start of the game. Ultimately, the winner of the game is the player left with all 1,500 chips in their possession.

Better late to the party than never, if I may get creative with a cliché. The recently resurrected Bovada Poker has added the Jackpot Sit & Go to its poker game offerings, finally getting in on the Lottery Sit & Go fun.  It is a three-handed affair where players begin with puny 500 chip stacks and blinds increasing every three minutes. It is a fast game, allowing players to get some poker in without much of a time commitment.

Of course, the big hook of the Bovada Poker Jackpot Sit & Go is the randomized prize pool, revealed by a spinning reel before the game starts. Most of the time, the prize pool will be just twice the buy-in, but it can be as much as 5x, 15x, 120x, 240x, or, in the rarest cases, 1,200x the buy-in.

Here is a breakdown of the prize pool multipliers and their corresponding probabilities:

As you can see, there is not much of a point in hoping for anything more than 5x the buy-in. The 2x and 5x multipliers account for 99.882 percent of the random outcomes; you can do the math for the rest of the multipliers. 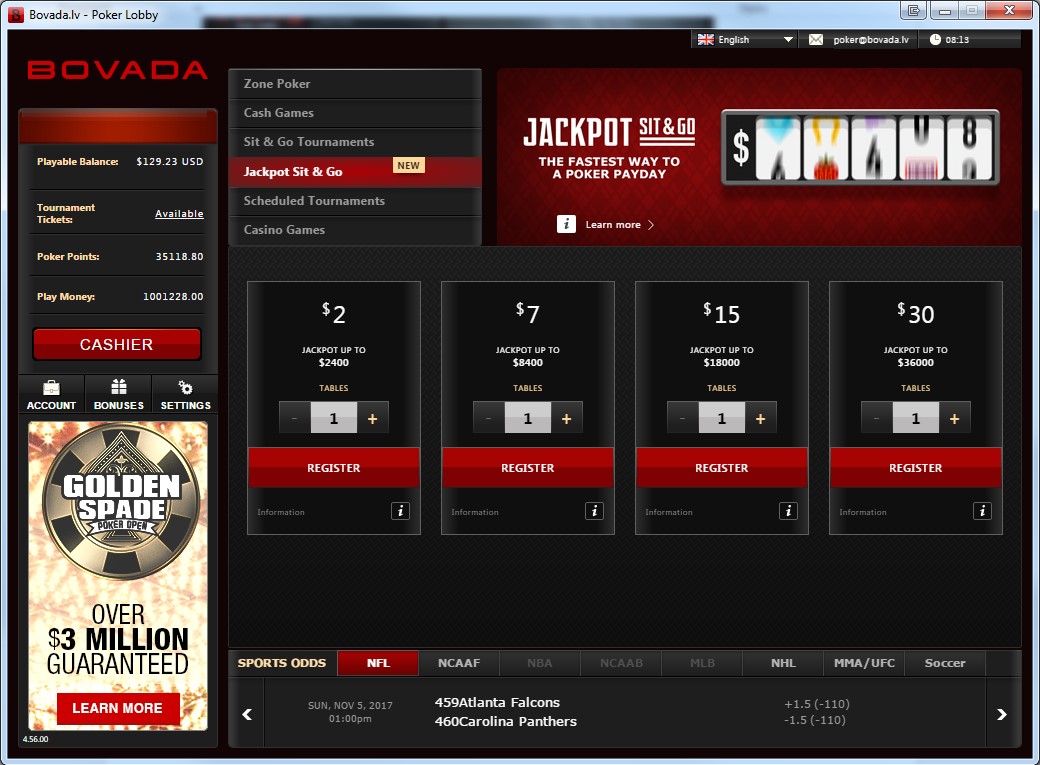 WHAT YOU NEED TO KNOW ABOUT JACKPOT SIT & GO

AVAILABLE ON DESKTOP ONLY: For the moment, Jackpot Sit & Go tournaments can only be played on desktop through the poker software, which you can download here.

IT ESCALATES. QUICKLY: Jackpot Sit & Go is designed to be the fastest way to a poker payday. For that reason, it follows a ‘hyper turbo’ structure, with blinds increasing every three minutes.

START WITH 500 CHIP STACKS: Each player starts with 500 chips in their stack. The winner takes all, except for when one of the top three multipliers is hit. See the payout table for details.

RANDOMLY DETERMINED PRIZE POOL: The cash prize you’ll be playing for is determined randomly by a spinning reel once all three players have registered for the game, giving you a shot of playing for up to 1,000 times your buy-in.

PLAY 24/7: Jackpot Sit & Go tournaments are available any day, any time, allowing you to hit the felt whenever you have a few minutes to play some hands.

PLAY UP TO FOUR GAMES AT ONCE: If multi-tasking is your thing, you’ll be glad to know that you can play up to four Jackpot Sit & Go tournaments at the same time.

HOW TO GET STARTED

The randomly determined jackpot prize pool at Bovada (decided at the start of the game via a spinning reel) allows all three players to play for a prize pool up to 1,200 times the buy-in pool amount, with first place taking home 1,000 times their buy-in.
Buy-ins range from $2 all the way up to $30, meaning if you hit the jackpot for a $30 buy-in you could be playing for a prize of $30,000. See the payout table above for all possible jackpots.