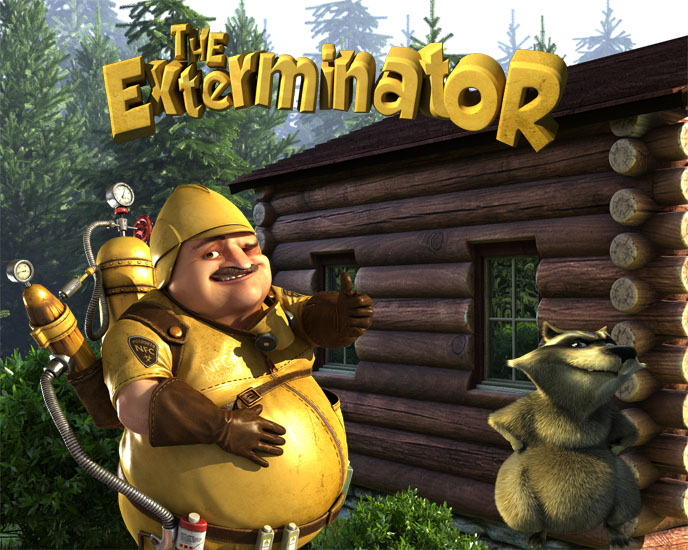 Slots.lv has two interactive online slots that are perfect for those looking for an engaging storyline while spinning reels. While both games have themes that revolve around critters, they couldn’t be more different from each other.

We’ll start with The Exterminator.

This 5-reel, 30-line slot starts with an introductory scene that features a jolly exterminator with a problem. Up until now, he has been able to eliminate any pest; however, a clever racoon has gotten the best of him.

You’ll be taken to a log cabin in a forest, where the exterminator keeps a lookout for the raccoon while you spin the reels. The pesky racoon continuously makes appearances; this cheeky pest gets a lot of pleasure from fooling his nemesis.

The game has a very useful Sticky Win feature that’s sure to bulk up your payout. Whenever you hit a winning combo, the winning icons stick, and the non-winning icons re-spin, maximizing the amount of coins you can collect.

You’ll pocket even more coins if you trigger the Wild Reel Bonus, which expands to fill the entire reel. This increases your chances of triggering the Great Raccoon Chase Free Spins Mode – which will not only have you spinning for free, but also applies a random multiplier anywhere between 1X to 5X.

If you’re the “go big or go home” type, you’ll love the Double Up Feature. After triggering any winning combination, you can double up, which brings you to a new scene, where you assist the exterminator in deciding if the next card in the deck will be a black suit or red suit. Guessing correctly will double your winnings.

If that weren’t enough, you also get a bonus round if you land enough Blueprint symbols on the reels. This round takes you to a second screen, where you get to select where you think the pesky raccoon is hiding. Find him, and you’ll be rewarded generously.

If you find that the exterminator can’t quite eliminate that buggy feeling, you may have been bitten by the travel bug. 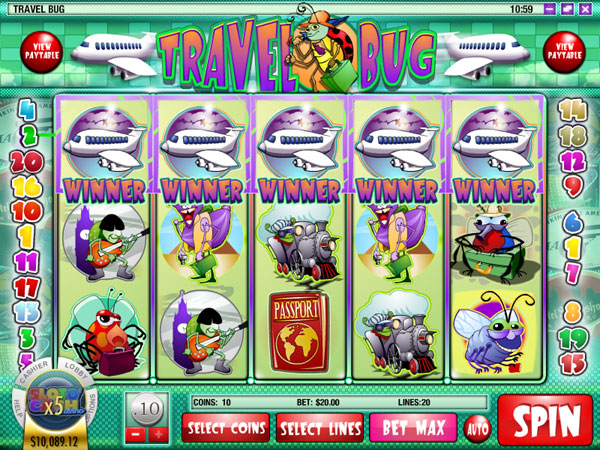 Slots.lv‘s 5-reel, 20-line slot, aptly titled Travel Bug, will take you all over the world, where you’ll see French caterpillars posing in front of the Eiffel Tower, ladybugs trying to hitch a ride, spider tourists snapping pictures, and many more critters who are determined to see the world.

This game is worth trying for the incredibly fun mini-game called the Travel the World Bonus Round. Land at least three Passport symbols on the reels, and you’ll get to earn money by collecting Passport stamps. You only have so much budget to dedicate to airfare, so you have to be careful. The bonus round takes you to the ticket counters at various airports, where you get to pick the airline that you think offers the best rate to fly to your next destination. Choose wisely, and you’ll get to visit far off places that your little wings could never get to. Who knows, if you trigger a big enough payout, and you could make these trips a reality!