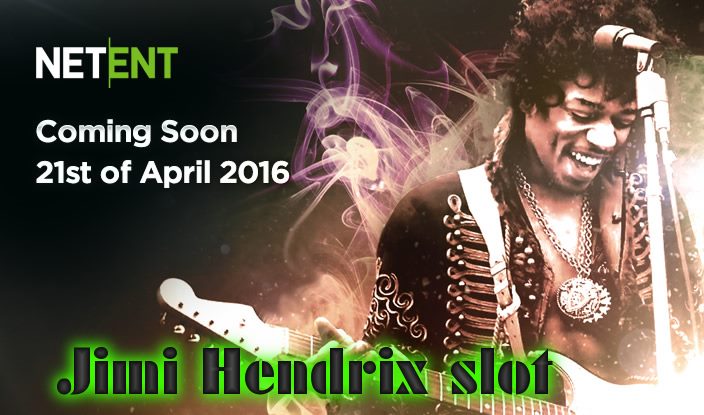 NetEnt, the leading supplier of digital casino entertainment, has a mission to keep players rocking with its upcoming Jimi Hendrix-branded video slot.

Widely regarded as one of the most creative and influential musicians of all time, Hendrix came to prominence in the late 1960s when releasing his three studio albums: Are You Experienced, Axis: Bold As Love, and Electric Ladyland.

The game studio is determined to develop a fitting and authentic homage to Hendrix, featuring five of the guitar God’s most famous songs like “Foxy Lady,” “Purple Haze,” “Crosstown Traffic” and “Little Wing” and includes rich, colorful 3D graphics inspired by the historic era.

Jimi Hendrix’s instantly recognizable, true-to-life character has been developed with 10 different morph targets, creating hundreds of unique facial expressions, which have been modified by hand for added realism. The animated video slot is developed entirely in 3D with stunning graphics and is due for release in April 2016.

“Jimi Hendrix is indisputably one of the greatest rock stars that ever lived. It is an honor and a huge responsibility to be granted the rights to create a Jimi Hendrix branded product” said Simon Hammon, Chief Product Officer of NetEnt. “Working together with the Hendrix family and their companies Experience Hendrix, L.L.C and Authentic Hendrix, LLC on this game will help make our NetEnt Rocks series one of the most desirable product offerings available.”

“We take enormous pride in the role we play in promoting Jimi’s art and persona,” explains Janle L. Hendrix, President & CEO of Experience Hednridx, L.L.C. “Because of that, we are extremely selective in who we partner with. NetEnt, we feel, has an understanding of the importance and we’re thrilled to work with them. The prospects are exciting!”

Crowds will be rocking with the second slot in NetEnt’s groundbreaking “NetEnt Rocks” trilogy which launched its tour in January with Guns N’ Roses – the most successful launch ever in NetEnt history. With a third band joining in September this year, NetEnt’s game schedule is set to be a tour like no other!

Grab yourself a Gr8 Daily Bonus at bet365bingo and win an...