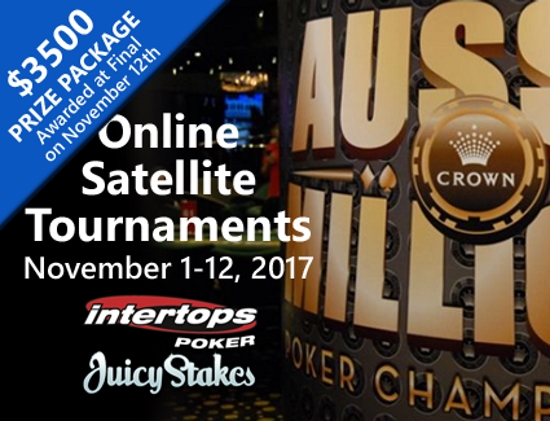 (Press Release) – The second Aussie Millions online satellite tournament series starts at Intertops Poker  and Juicy Stakes  on Wednesday.  The winner of the Final on November 12th will win a AU$3500 prize package to compete in the prestigious AU$1,000,000 Aussie Millions GTD NL Hold’em opening event in Melbourne this winter.

The Aussie Millions, which began transforming Melbourne into a southern poker mecca in 1998, is one of the biggest stops on the international poker circuit. It attracts both recreational and professional players from all over the world.

The AU$3500 online satellites prize package includes AU$1150 buy-in for the opening event, four nights in a studio room at the five-star Quay West Suites (January 19-23, 2018) and $500 toward travel expenses.

“What a great way to start 2018!” said Intertops’ poker manager.  “Playing the richest and most prestigious poker series in the southern hemisphere!”

Players can register under the Tournaments tab in the poker software.  Buy-in for Step 1 tourneys in the three-tier series is just $3.  Players can win their way from Step 1 to the Final or buy-in at any stage.   Just before the Final on November 12, a $1 Last Chance tournament will award one last seat at the Final Table.

Players from anywhere in the world are welcome to compete in this satellite tournament series but with travel expenses to Australia being relatively high from North America and Europe, the field is expected to be primarily Australian players.

Intertops Poker and Juicy Stakes are the most popular online poker rooms on the Horizon Poker Network. They also offer a selection of casino games including Blackjack, Roulette and Video Poker.

Intertops Poker is a global poker room on the Horizon Poker Network offering Texas Hold’em, Omaha ring games and tournaments of all stakes and levels 24/7. Intertops Poker has one of the most lucrative loyalty programs in the industry. New players receive a 200% bonus up to $1000.