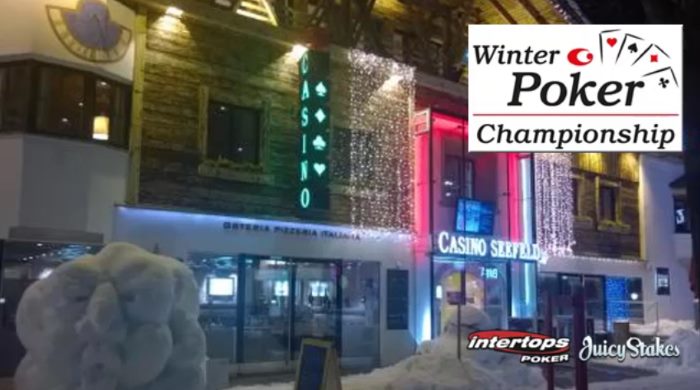 A financial analyst from LA won his way to the Winter Poker Championship in Seefeld, Austria by winning an online satellite tournament at Intertops Poker last weekend. Douglas Klein is a regular in the local casinos, but this will be his first overseas tournament.

Douglas will make the trip with Tim O’Keefe, who won his way to the Austrian ski resort the same way last year. Since then, as a sponsored player, Tim has competed in tournaments in St Maarten and Aruba with the Intertops Poker team. Sunday’s Final, the last tournament in a three tier tournament series, was a nail-biter for Klein.

“With three players remaining, I flopped a set of 9s against AA and won a huge pot,” recalled the champion. “I had the chip lead going into heads up so I felt like I would win. I lost one big pot but then crippled my opponent shortly after. I ended up by putting my opponent all-in with 88. He had A7. That was it. The most exciting moment I’ve had playing poker and now I’m going to Europe!”

The winner has a strategy for winning online tournaments that certainly worked for him this time.

“I try to play pretty tight for the first few levels while maintaining at least an average stack,” he explained. “As the blinds increase, I play more aggressively, opening with a wider range and bluffing more. In the middle levels, I feel like you have to take chances to get chips. If I have 15-20 BB and it’s close to the final table, I lower the amount of my opening raises and play aggressively in position. This strategy seems to work well. I have a decent win rate.”

“I’ve never played in an event as big as the Winter Poker Championship in Seefeld,” he said. “The biggest tournament I ever played in was a $500 buy-in with about 100 players. I finished on the bubble. Aside from that, I’ve played in several small tournaments in Las Vegas, Palm Springs and Commerce Casino in Los Angeles.”

Douglas will have his wife with him for moral support, and O’Keefe will be there to help him get the lay of the land.

“My first time over there I couldn’t believe how differently they play in Europe!” said O’Keefe. “Maybe all that schnitzel makes them so aggressive? I don’t know, but I’m more ready for them this year, that’s for sure!”

Both Intertops Poker and Juicy Stakes welcome players from anywhere in the world. They’re the busiest online poker rooms on the Horizon Poker Network and also offer a selection of casino games.