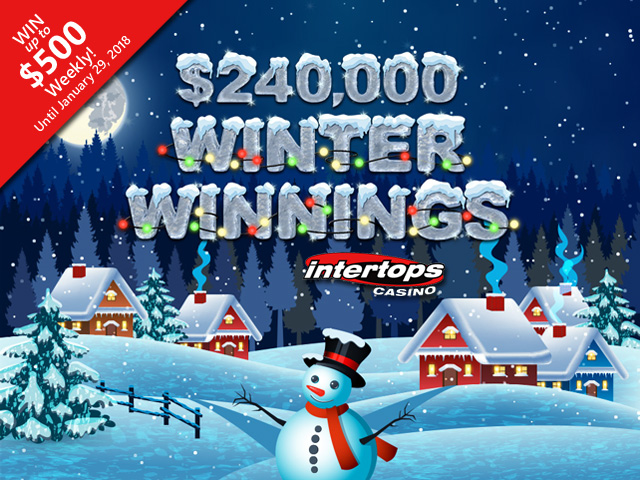 It’s a winter wonderland at Intertops Casino this month as players compete with each other for top prizes during the $240,000 Winter Winnings casino bonus contest.  Every week until January 29th, 300 frequent players will win bonuses up to $500 each and many more will get bonuses in random draws that even occasional players can win.


Intertops Casino players automatically earn points when they play any of the casino’s slots and table games on their desktop or laptop computers or in the mobile casino for smartphones or tablets. A live scoreboard shows everyone’s current points ranking.


“Competition between players can get pretty intense, especially over the weekend,” said Intertops’ casino manager.  “If you can move up a few spots on the scoreboard it can make quite a difference to the bonus you get on Monday!”


Those that make it to the top 20 each week will be entered in a final draw for a $1000 cash prize. There are no wagering requirements for this prize so it can be withdrawn any time.


Christmas slots like the brand new Swindle All the Way will be popular during the holiday season. And later this month Asgard, Realtime Gaming’s epic new Viking-themed slot with four bonus features, will make its debut.


Swindle All the Way slot  is a 25 payline slot featuring two comical burglars with plans to steal presents from under the Christmas tree. It also has two progressive jackpots that can be randomly won after any spin. Three or more scatters trigger a bonus game where players can win up to 60 free spins with up to 33X prize multipliers if they can find the robbers hiding on each reel. Other Christmas classics at Intertops include Naughty or Nice, Santastic and the Santa vs Rudolph trilogy (Rudolph’s Revenge, Santa Strikes Back and Return of the Rudolph).

Asgard slot is an All-Ways-Pays game with Golden Wilds that double payouts. Three or more Bonus symbols trigger a choice of up to four features that award up to 30 free spins with prize multipliers, extra Wilds or “morphing” symbols.  The Thunderbolt Feature that turns up to five reels Wild can be triggered at any time.

ABOUT INTERTOPS
Founded in London in 1983, Intertops accepted the world’s first online sports bet in 1996. It launched its first online casino in 1998 and its poker room in 2003. There are more than 300 casino games from Real Time Gaming (RTG) in its main casino and another 200 games from Wager Gaming Technology in the Intertops Casino Classic. Several slots have progressive jackpots currently well over $1,000,000.  Intertops’ most popular games are available in its new enhanced instant play online casino and new mobile casino. Intertops players compete against each other for top weekly bonuses.

Rival Gaming is set to launch ‘Champs-Élysées’ a new 5 Reel...