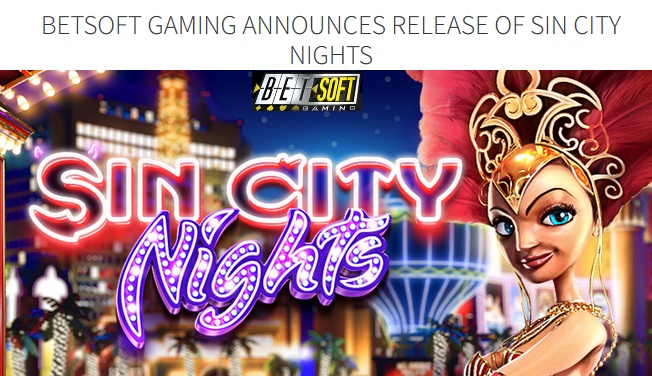 Industry innovators Betsoft Gaming have announced the launch of the newest game to join their blockbuster Slots3™ collection – Sin City Nights Slot. Sin City Nights ToGo™, the mobile version of the game, will be released in tandem with the PC version.

Sin City Nights Slot is a five reel, twenty-five payline cascading true 3D video slot that embraces the sultry nature of Las Vegas, storied and glittering casino capital of the world. In Sin City Nights, each winning combination explodes in a shower of sparks, leaving space for new icons to fall onto the reels. Each line win increases the generous multiplier so that wins are larger with each consecutive winning spin.

A Free Spins bonus is available when three specific icons occur on an active payline, and during this Free Spins mode all winnings earn 3x the base amount. This works with the game’s multiplier to offer up to a potential 15x on all wins!

A double up feature enables a player to potentially double the amount of each win, and a frequent Wild Symbol substitutes for all other icons including the Free Spins icon!

“Sin City Nights Slot is an incredible callback to the Vegas we all know and love,” said Stephen Jackman, Betsoft’s Head of Product Development. “The smooth funk of the soundtrack enhances the strong retro styling of the game, perfectly encapsulating those simmering Las Vegas nights while the wins keep rolling in and piling up with the ever-growing multiplier function.”

Betsoft Gaming, broadly known as the innovator and leader of true 3D cinematic gaming, is a Tier One developer and provider of complete system online gaming software. With a game library of over 180 games including the iconic Slots3™ series, Betsoft Gaming has met and exceeded the quality found in console video games and animated feature films. Starting in 2012, Betsoft initiated a concentrated push into the mobile gaming sector, with many of their popular Slots3™ games becoming available as the ToGo™ collection. Betsoft began releasing the highly anticipated Slots3™ Interactive™ line of games in mid-2013, representing the future of online slots gaming. Betsoft Gaming’s extensive portfolio of clients includes some of the top gaming operations in the industry.